Survivor South Africa: Champions has already had a few interesting twists, especially with the idea that Sonette might have stolen the immunity idol to save herself last week. This week, however, things became a lot more interesting after Steve’s tribe was sent to tribal council. During the show, the tribe mates, lead by Shane and Marian, decided that he was an unpredictable player and blind-sighted him into voting for David. Unfortunately, this meant the end for Utara’s main provider. I caught up with Steven this week and asked him the questions on all of our lips.

You were completely blindsided by your elimination. Why do you think the tribe was so adamant to see you leave the island?

I think that my alliance, Marian in particular, started to feel a bit threatened by me. She didn’t like me calling her out for stooping so low as to steal an idol and she knew, that if it came to us in the final 2 or 3, she would come off second best.. So she spotted an opportunity to get rid of me and she took it! Well played by her. She was able to disguise her insecurities in a ‘strategic’ opportunity when she posed it to Shane and he bought it. While I understand the strategic thinking behind what they did, I still don’t think that it was the right decision. Survivor is all about the numbers game and the original Utara tribe outnumbered Selatan 2-1; by voting me off they were losing the numbers advantage. I also believe that Vel, Buhle and Solly will see right through their ‘goodwill’ and realise that Marian & Shane can’t be trusted. Marian and Shane still needed me in the game… But time will tell and my guess is that they will be the 1st to be voted out post-merge, unless they are able to use their two idols wisely!

You were the tribe’s main provider. What do you think they will miss out on now that you’re gone?

Yes, I was the main provider. Although I don’t think that this was a huge consideration when they were looking to vote me out.. Merge is on the horizon and with merge comes quite a few reward challenges and food up for grabs. That said, it is difficult to survive off of one meal every 3 or 4 days. So yes, I do think they will miss me!

Shane and Marian have been doing a lot of scheming. How do you think they are playing the game?

Marian and Shane are playing the true Survivor Villain’s game. They are doing anything they can to make it through to the final. I don’t hold it against them for playing like this, but definitely don’t think that it is the best strategy to take into Survivor. The real skill in playing Survivor is to get the very same people that you vote out (the jury) to vote for you in the final. To do this, you need to vote them out nicely; which is easier said than done! Anyone can lie and backstab their way to the final, but to win from there is close to impossible! (take Russell Hans from the American Survivor as a prime example). With the strategy that I went into the game, one of truth and honesty, it is so much more difficult to make it to the end. However, if you do make it there, you are almost guaranteed a win.

Is there any bad blood towards anyone now that you’ve watched your elimination on TV?

No! Definitely not!! It is a game after all and there are plenty of different ways to go about playing the game. You can’t hold that against anyone.

What was the most challenging thing about being on the show?

Food!!! It is crazy to experience how food consumes all of your thoughts in that situation.. There is a stage where your brain stops telling you that you are hungry, but you still feel so so weak. It’s difficult to describe or understand until you have experienced it first-hand.

Who do you think is playing the best game?

I think that Altaaf, Moyra & Graham are in the best position to win the game from here; they have the numbers and have been playing a good game. Looking back, I wish that I had been on the Seletan tribe and formed an alliance with them from day 1. If Marian and Shane are to make it any further in the game, there will need to be a lot more scheming on their part still to come!

What was the first thing you did after being voted out?

I ate!! I called my parents and girlfriend, had a shower and slept. It felt so good to enjoy the comforts that we often take for granted. And then I had some more food!

After having gone through an elimination, if you could do it all again, what would you have done differently?

I think that luck plays a huge part in Survivor. Luck in challenges, who is on your team from the beginning, when they decide to merge, etc. I don’t think that there is too much that I could have done differently (given the team combinations). I still find myself running scenarios through my head & reliving every situation. I definitely made mistakes in the game but 2nd time around I hope I would have learnt from my past experiences, be wiser, more alert and adaptable. I would go into the game with a similar strategy, more refined and hopefully this time take the R1m home. For me, there is a lot of unfinished business left on the island and my largest regret is not making it to the merge to compete on an individual level (I missed it by 1 day!!) I am pretty certain that you will be seeing me on your TV screens in the very near future… Watch this space!! 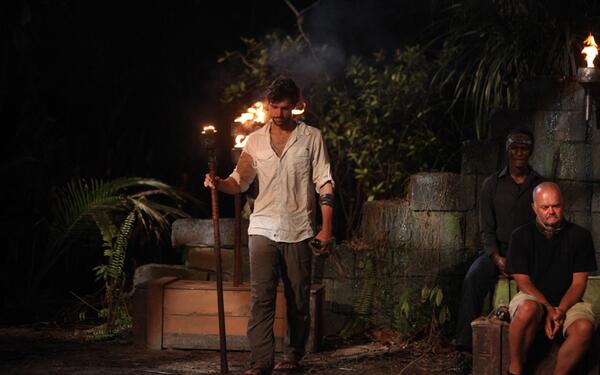